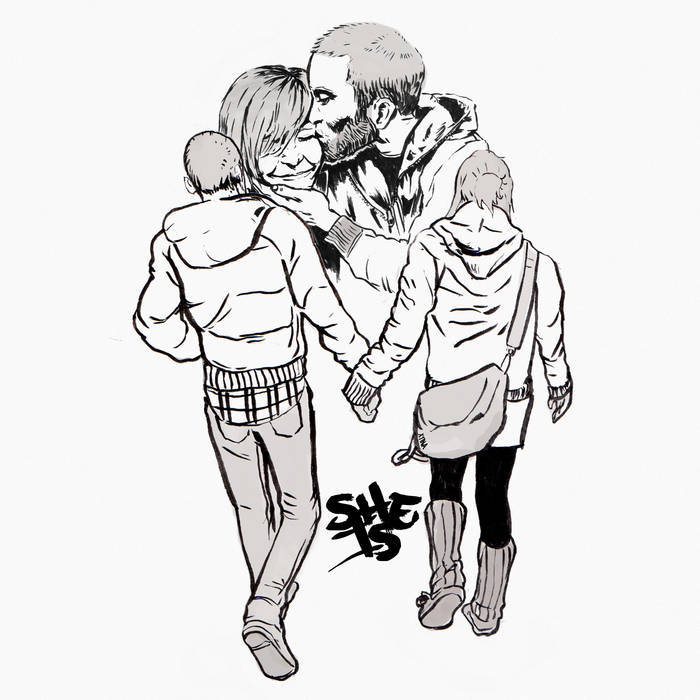 
'She Is' is an extremely personal song. I will let its instrumentation, lyrics, and video as you listen/watch paint the picture of Christina's beauty, intelligence, and personality. I would like the following to simply serve as a background of my relationship with her, clarification as to why I wrote this for her in the first place, and why I decided to revisit and complete the song today:

I met Christina in April 2012. At first sight I felt something I never had before. After working up the nerve to approach her, all anxiety drifted away in a matter of a few awkward moments. I felt incredibly comfortable talking with her despite my initial feeling that she was way out of my league. Thankfully, she quickly made it apparent that she wasn't after all. We pretty much hit it off that day and although my dumbass didn't ask for her number, I had already gotten to know her friend, Jamie. So I brought Christina up in curious conversation with Jamie a few days later. Jamie had already witnessed my interest in Christina and decided to become the 'matchmaker.' She's the only reason Christina and I met again about a week later. I am forever grateful as that was the night our interest in one another escalated into what it would soon become our relationship.

Due to a scar from my previous breakup and an open wound Christina had from recently losing the job she put her all into for so long, you could say we were both very anti-relationship. And although she felt something for me too, she understandably had her guard up. However, after some "snap out of it, I have a good feeling about this guy" advice from Jamie, the 3rd time we met none of that seemed to matter. We began dating.

Within a month, despite how much I fought it, I finally accepted that I was in love with Christina. I pined over telling her for days but eventually decided to tell her one night. As we sat on her apt steps, about to say goodnight, I said, "Hey, so I have to tell you something." She responded with, "Ok, but I'm scared, Tim... because I think I'm falling in love with you." Apparently she thought I was going to call it quits. It was the most beautiful moment.

After about 5 months of living together, I realized her birthday was coming up in Nov. For me, marriage was never a thought and I wasn't stupid enough to propose to her so early on, but something inside me knew that one day I would. I didn't know what to get her, so I decided to start writing a song for her instead. I wanted to write something describing where we had been from first meeting until then and what her and her family meant to me. It was almost like a pre-proposal in retrospect. Since I knew I wanted to marry her someday I also wanted to make that apparent to her.

I didn't finish the song by her birthday. I had a couple verses and a hook written. However, on that day I told her about it and apologized that it wasn't yet finished. She demanded that I sing to her what I had written so far... so I did. I will never forget her reaction.

After almost a year of living together, unfortunately our relationship began to deteriorate. It wasn't at all that we were falling out of love, but personal issues that she struggled with combined with my stubbornness caught up with us. A lot of this also had to do with us moving in too early on. We had to break up for our own personal well being. She ended up moving back to Syracuse temporarily to try to work things out. This was heart-wrenching and left us both in shambles cause neither of us wanted to part, but we had to, at least temporarily. We both still wonder to this day what the hell happened.

Once she returned to Seattle we tried our mutual best to stay clear away from one another--knowing that getting back together before we both fixed ourselves would be a mistake. That fear of mistake wasn't strong enough to deter us. We began seeing each other again out of view and judgement of others, and found ourselves picking right back up with the happiest parts of our relationship. We still knew it was too soon, but continued to see each other on & off through the following years.

In March 2016, Christina became sick with the flu. Her flu turned to pneumonia, then resulting organ failures put her in the ICU for weeks. I spent every moment I could with her and her family during that time until her body couldn't take any more... on April 12th, 2016 she passed away.

During the following months I made it a point to revisit and finish the song I had written for her so long ago--not just to help with my grieving process, but more importantly because I know she would've wanted me to.

I had a scratch beat I had made for it but I never really liked it. So, I decided to reach out to my long time friend and outstanding audio engineer, Kevin Bressler. He immediately saw how important this song was, and connected me with talented producer, Nick Goodwin. Nick spent multiple hours meticulously crafting the beat and wouldn't settle until he and I both felt it was right. Once we settled, Kevin then spent an ungodly amount of hours arranging, mixing, and finally mastering the song. My very talented friend, Richard Lim was gracious enough to draw the artwork. I couldn't be more grateful for the huge part they all played in the production.

I wish she had more time on this earth. Despite our ups and downs, every word I wrote then remains true to today. One of the things I will regret for the rest of my life is telling her during our initial break up that I loved her but was no longer "in love" with her. That was a complete lie. I never fell out of love with Christina. I only said that at the time because I didn't know what else to do to help her move forward with mending the personal pain that only she could resolve on her own. She made it a point to reassure me periodically that she was still in love with me and reiterated that she understood why we couldn't together, at least not for a while. I'm thankful that during one of those occasions not too long ago, I retracted my statement and confessed to her that my love for her hadn't ever actually changed. We both knew in our hearts that it truly was only a matter of time until we would realign with one another. Unfortunately, that waiting period came to an end in the worst way possible.

I will always love Christina and even though she has passed I promise to continue to be there for her family. I will never forget the person who taught me how to love again... unconditionally. She was and still is one of the most amazing people ever to bless this world.

Beside myself
Just sitting beside...
Her mannerisms
Right in line with my quirks

Does she like me? Even slightly?
Why me? I’m not even in the right league

Watching her interest peak
Through open-laced, draped curtains
I didn’t walk the walk
I just talked like a complacent person

Affection grew so quickly
It felt like an injection
Worry depleted,
Leaving a connection

We’d figured out
The thickest clouds
Of doubts and misconception
Wouldn’t disallow two lost souls
To call an exception...

She Is...
So willing to fight
For the opportunities
We both intend to grasp

She Is...
Cumbersome at times
But so am I
When down-strides
Lead us off-track

She Is..
That anomaly
Who comforts me
Even when I’m being a stupid-ass

She Is...
The Love of my Life
It’s only a matter of time
‘Till she becomes my other half..

Usually I reach
For a quieter kind of women
Yet to me she’s a breath of fresh air
I find exquisite...

Won each other over
Despite some dumb stumblings
Now, at dry humored breakfasts
Smiles replace smirks

She...
Connected us,
Helping us accept the trust
We now have for one another...

What comes next’ll be
Expressed in a tongue
Only we know how to speak
‘Cause we are invested,
In Love

She Is…
The most creative, yet
Uncredited story writer
You have never read

She Is...
Innately competitive
Presented any challenge ‘n’
She’ll come out ahead

She Is...
Respectfully talented
In the way she speaks her mind
With such wit and intelligence

She Is...
Uncommonly genuine
In spite of any personal pain
She’s dwelling in

She Is…
One who sides with her family
Selflessly, whenever
They need her hand

She Is...
The utmost comforting
Encompassing a beauty
Unsurpassed

She Is...
The brightest of company
Accompanied by
The most addictive laugh

She Is..
The love of my life
It’s only a matter of time
‘Till she becomes
My other half..

More often than not
Roads’ve been blocked
Be we just take a pause...
Until the steers can cross

Hell, we overcame the obstacle
Of never finding one another
Like one of pair of lost socks

Damper determination?
It shall not at all
The hamper caught the fall
Our dedication won’t drop the ball

This is just our start, cadence
Let the harps play
Until the stars cave in!

One hurdle lingers,
One question left to ask’ll
Match circles on our fingers
Under an archway, since